The Component Smart Phone and Why It Will Fail 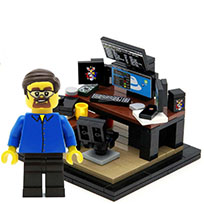 Today TechCruch covered a direction Motorola is taking with a project called Ara.  The idea here is that a smart phone can be broken up into individual components and you can buy each of them individually.  This looks really intriguing from a business perspective as well as the perspective of a technologist such as myself.  However cool this idea is, I think it is doomed to failure.

The problem I see with this sort of direction for Motorola is that the commodification of a devices components generally takes place in a very different manner. This commodification happened in the PC industry. However, in the PC it was very different.  The main people who were putting together computers from parts were enthusiasts who loved it as a hobby or they were company professionals working to support normal users.  In other words, the customers were generally the device users. Even in the case of corporate computers, the IT guy is generally the person who uses the computer the most.  Users generally spend their time in the software, and do not worry about the hardware.

In the phone industry, this commodification and specialization has already happened, Apple or Google, or Microsoft don’t make their own displays or their memory, or the battery or radios.  They as assemblers and designer are already optimizing the device for their users.  Asking a user to assemble the phone from components means that Mom and Dad will have to fiddle with small parts. If not mom and dad, perhaps its the sales guy or the receptionist.  Perhaps its a teacher or a chef.  It doesn’t matter, each of those people typically doesn’t have the time or the desire to fiddle with a component phone.  This is something they never wanted to do with a PC.  This lack of need or desire will even be made worse with the size of these components.  In the past a video card or a sound card was large enough to be able to work with your hands.  These sub components will be the size of AAA batteries and smaller in most cases.

The commodification of a devices components making up the Smart Phone will happen.  And it is already happening with the rise of wearable computing.  Today when you want to augment your smart phone with an external device or sensor you end up adding device you plug into your shoes, or wear around your wrist.  Perhaps you purchase a stylus or a batter pack.  Each of these devices are the sub components you are using to customize and personalize your device.  The development of a common bus for the Wide Area Devices (WiFi / 802.11x) has only accelerated this.  Now that Apple and Google are implemeitng Bluetooth 4.0 LE, this will accelerate down to smaller and lower power devices.

This model as opposed to the proposed model by Motorola seems more likely as it allows for individual low end (from a price perspective) disruption, customization, and gives a diverse number of businesses opportunity to generate value.